My husband has slowly started clearing out our winter vegetables to make room for his spring planting.  A few weeks ago he decided it was time for the beets to go. So I got out my “Food in Jars” cookbook that my sister gave me as a present after my first canning adventure and found a recipe for Gingery Pickled Beets.

My friends, Jenny and Vickie, came over to see how the process works and to help me out with the mountain of beets. Well, it turns out there wasn’t a mountain but definitely enough to keep us busy.

I did some of the prep before they arrived – boiling and peeling the beets.  The colors of these beets are so intense and beautiful.

Once they arrived, wine was opened (of course) and then it was a fury of sterilizing the jars, cutting the beets and preparing the brine. 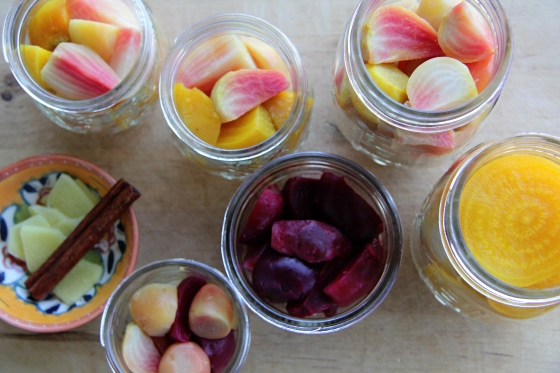 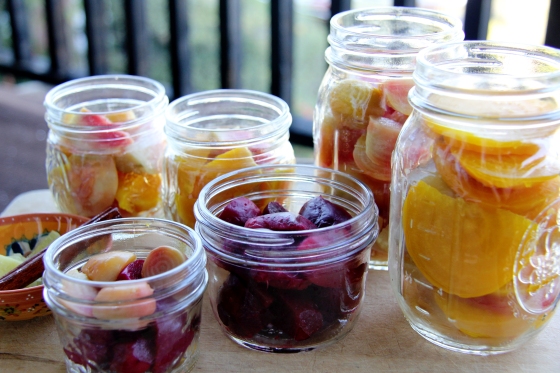 I will say that the hardest part of this process was filling the jars with the liquid.  So far I have only preserved tomatoes, tomato sauce and red onion marmalade – all of which you cook in one pot and add to the jars.  This calls for placing the beets in the jars first, then adding the preserving brine.  After a few spills over the top, I finally got the hang of it.  We had a little over two pounds of beets, but I only made one batch of brine so it was a mad scramble to make a bit more to fill the last of the jars. 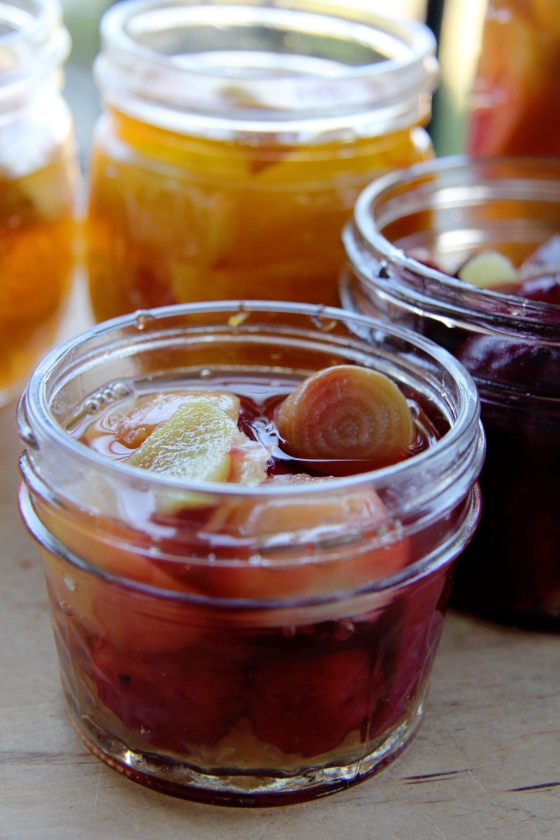 We had a lot of fun and this executive canner couldn’t have done it (well, wouldn’t have wanted to do it) without my two sous canners.  They each got to take home a jar as a parting gift for their efforts. 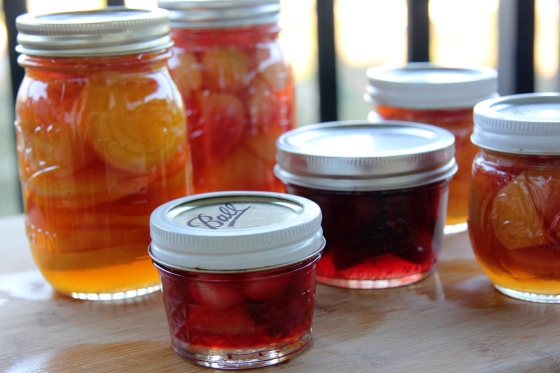 Epilogue:  Over a week has passed since I made this recipe so last night we decide to open a jar to taste.  So delicious.  I had to stop my husband from eating the whole jar since we all wanted to try them. I will definitely be making this again. 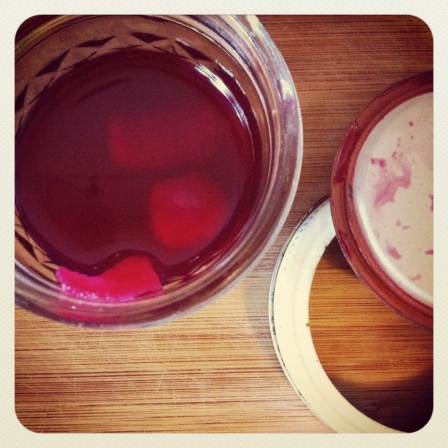 Adapted from Food in Jars by Marisa McClellan

(if you are at all interested in canning, seriously – buy this book.  It is amazing)

Scrub the beets and remove the greens and roots.  Put beets in a pot and cover with water.  Simmer over medium heat until the beets are tender, approximately 30 minutes. Be careful not to overcook, you want them to be firm so they are still a bit crunchy once they are pickled.  Drain and rinse with cold water.  Once they are cool, rub the skins off with your fingers.  Beets stain so wear plastic gloves!  Cut the beets into wedges and set aside.

Sterilize 4 regular-mouth 1-pint jars in a boiling water bath. Place the lids in a saucepan, cover them with water, and simmer over low heat.

Combine vinegar, 2 cups of water, salt, sugar, cinnamon stick and ginger slices in a pot and bring to a boil.

While the brine is boiling, pack the beets into your sterilized jars and slowly pour the hot brine over the beets.  Make sure to include a few ginger slices in each jar.  Leave about 1/2 inch space from the top.  Gently tap the jars on the countertop to loosen the bubbles or use a wooden chopstick to dislodge the bubbles. Add more brine if necessary.

Wipe the rims, put on the lids and rings and process in a boiling water bath for 10 minutes.

Let them cure for at least a week before eating.

Of Moms and Men
cookinandshootin